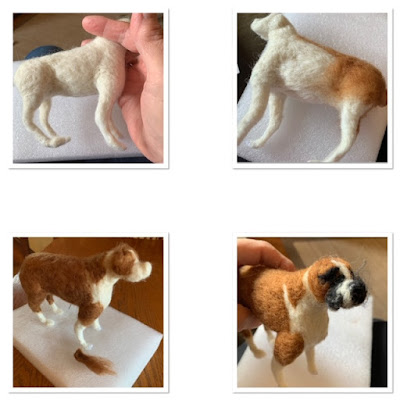 These past few months at home have given me time to explore other crafts beyond basketry.  Needle felting is something that I have been dabbling with for about a year.

For my daughters birthday, I decided to needle felt a mini portrait sculpture of her boxer Bella.

This was my first attempt to create a free standing felted sculpture.  I started with a pipe-cleaner skeleton covered with natural colored wool.  Once I was satisfied with the proportions of the body, I added the colored wool to mimic the fur patterns. 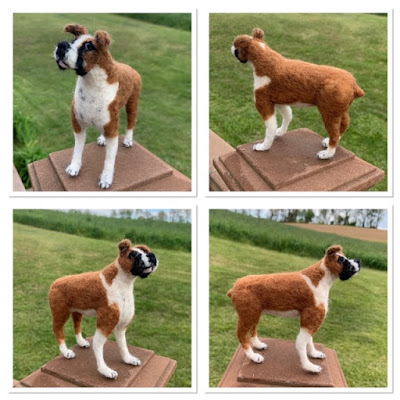 
Posted by Sharon Schaeffer at 7:33 AM No comments: 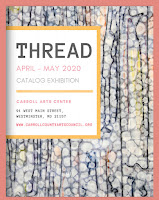 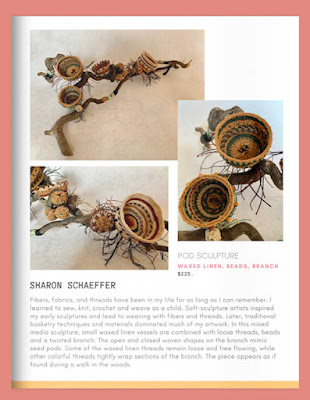 What is a thread? Is it a strand of fibers? What is the thread that connects us together?  These were the questions posed in a call to artists for a juried show at the Carroll Arts Council .

I was one of the twenty plus artists whose work was selected to be in the exhibit.  I created a mixed media sculpture of waxed linen open and closed vessels  attached to a twisted wooden stick. Beads and colorful threads also are incorporated into the piece.

Due to Covid shutdowns, the exhibit is now a online catalog exhibit.  You can see the other interpretations, using a variety of media, of the concept of THREAD on the Arts Center website.
www.carrollcountyartscouncil.org/event/thread/ 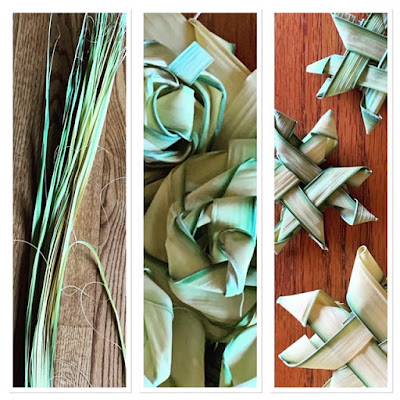 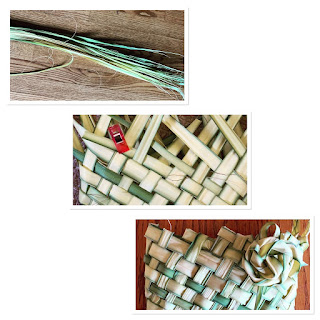 I have been experimenting weaving with the palms I had ordered for my church's Palm Sunday service.  Since they went unused this year I had an ample supply to weave.

I started with some simple star and flower shapes.  I moved onto a heart-like wall-hanging with palm flowers attached.

Using the plated method of  basket weaving I tried a simple square vessel.   I then moved onto a small plated pouch with a flower accent and braided handle. 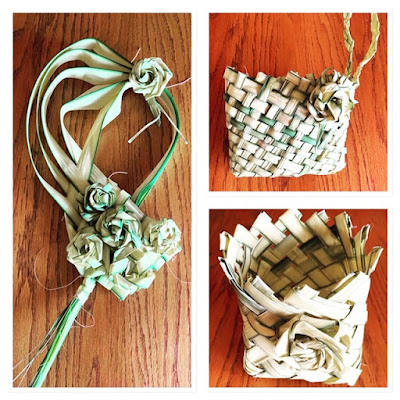 I have a long way to go perfecting weaving with palms, but it was fun.
Posted by Sharon Schaeffer at 12:15 PM 2 comments: 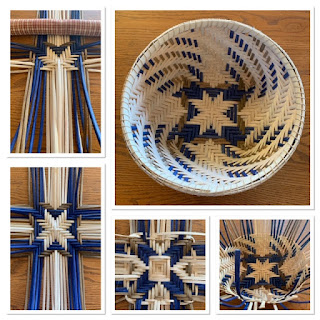 I am keeping busy weaving baskets during this time of social distancing.

Using flat oval natural reed with blue and brown dyed reed I wove a twill star pattern to form the base of a round bowl.

Gradually the sides of the bowl were raised while weaving a 3-3 twill with natural reed.  It creates a swirl pattern around the sides.

The rim was held in place with natural waxed linen thread.

Posted by Sharon Schaeffer at 6:40 AM No comments: 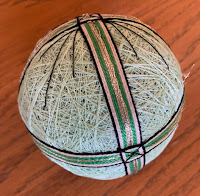 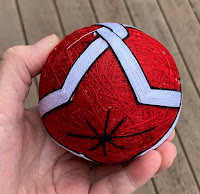 During my time at home I have been teaching myself the art of Japanese Temari thread balls.  I was able to follow the clear directions and techniques illustrated in the book Japanese Temari: a Colorful Spin on an Ancient Craft by Barbara B Suess.

I find it very calming to wrap the balls with sewing thread and then "sew" the patterns with embroidery thread.  It's also a way to use up fiber supplies I have around the house!

Just as basketweaving takes practice to master, so does this 3D embroidery.   I will continue to wrap balls and learn more techniques of Japanese Temari.  You may want to give it a try too. 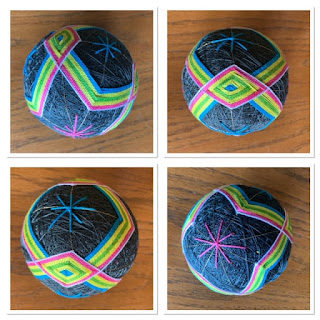 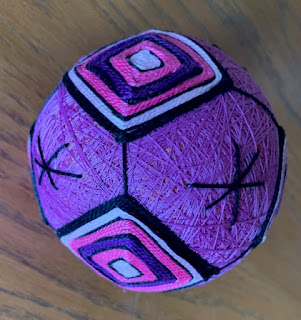 Posted by Sharon Schaeffer at 6:57 PM No comments: 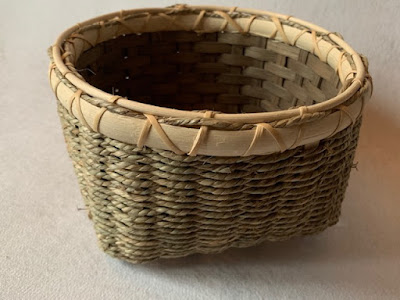 I have been weaving a lot of baskets while staying inside this month.  I have found some kits I had tucked away and forgotten about.  This double-walled basket is one I made from a kit by Anne Bowers.  It features a inner core of smoked reed and sea grass woven around the outside layer of the vessel. 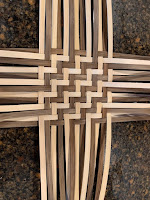 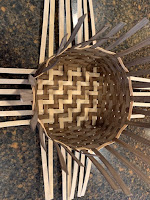 The square base was woven in a 2 -2 twill of alternating plain reed and smoked reed.

Using only the smoked reed spokes the inner vessel were woven using smoked reed.  A 1/4" plain filler row topped the shape before the spokes were tucked to the outside.They were later hidden in between the two layers of weaving.


The remaining plain spokes were upturned and woven with sea grass in a chase weave.
A 1/4" plain filler row topped the shape before the spokes were tucked to the inside, between the two layers of weaving. 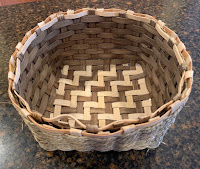 Lastly a half oval reed rim was attached with cane, sea grass and a piece of round reed.
Posted by Sharon Schaeffer at 12:50 PM No comments:

A Basket a Day Keeps the Virus Away 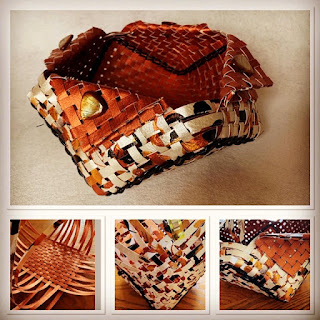 A basket a day may not keep the virus away but it keeps me happy as I hunker down at home.

This painted paper vessel is from a  kit by Karen Kotecki that has been sitting on my shelf waiting for me to have time to weave it.  I have time now!

The twined base secures the spokes and  becomes part of the design when diagonal corners and the weave-and-overlay form the shoulders.  The points are overlapped to the outside of basket and secured with a bead.

Posted by Sharon Schaeffer at 6:34 AM No comments:

Sharon Schaeffer
I am an artist, educator, and basketmaker. I have been making baskets since 1980. My baskets reflect a blend of traditional and contemporary styles and techniques.